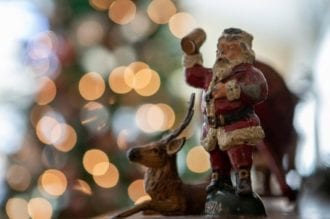 The spirited woman who has always loved the holiday, and has loved collecting its themed symbols, can tell the backgrounds of virtually every article in her vast assemblage.Like so many collectors, this former teacher who adored working with children in the primary grades, can’t resist almost anything related to the holiday, especially endless variations of Santa.During Christmas, her well-organized special shelving and storage areas begin to call out to her.“I can’t honestly say how it all began, but so many of these items have back stories,” she said.Case in point: Her treasures were accumulated in happenstance ways.When her late husband had a German associate in his work at the Department of Defense, he and his wife would present Christmas ornaments of German origin to their dear American friends. Even after their friends moved back to Germany, the four reunited frequently.Remarkably, Konrad’s passion for Christmas even led to family discovery. On a trip to Germany to see those friends, their hosts brought them to a small German town where they met a relative who they had not known of, and one who bore a startling resemblance to members of her family. “It was just amazing and so rewarding,” she said.As for personal memories and meaning, Sandy Konrad is still moved to tears when n she hers “Silent Night” sung in German.“There’s an ornament I have on a tiny tree that reads Stille Nacht that is just so precious to me. It’s part of my past, my present, and I hope, my future.”

So throughout her beautiful apartment, almost every surface displays Christmas-related objects from distant and near places, from the most elegant to the most simple and endearing.A dazzling large Christmas tree that reappears each year is beautiful in its simplicity, with ornaments that seem created to belong there.Some acquisitions are particularly meaningful, but all seem meant to be where they are.As perfect as the holiday scene at Sandy Konrad’s beautiful home, it didn’t just happen. Years of effort and commitment went into creating the holiday wonderland, from handsomely arranged antiques to a set of Santas, each one different from all the others, displayed in a wall shelf arranged with meticulous care to show both similarities and differences of that beloved holiday icon. They came from different antique stores in the region, with some being lucky finds.In looking back, Sandy Konrad realizes this joyful pursuit unconsciously began when she was grieving the loss of her mother when she wanted to find something that would give her meaning to get beyond mourning.One of her most cherished possessions is a Santa collection created by the celebrated Whitley Bay Company that chronicles the story of Santa and his elves.The collection began as a gift from her then fifth-grade class before she supplemented it with complimentary pieces that depict Santa and his elves checking his route around the globe on Christmas Eve. 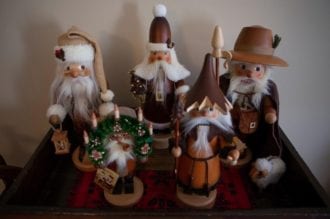 Totally enchanting, too, is her group of nutcrackers, painstakingly found on several trips to Germany. The smallest nutcracker actually is an incense burner.Konrad’s late husband always cheered her on and encouraged her to expand her collection. “He saw how happy it made me, and that made him happy.”Today, another generation loves and appreciates the wondrous collection.Grandsons Ben and Jay Van Put and Jesse and Jordan Konrad have shared their grandmother’s passion for a holiday filled with joy, tradition and beautiful, charming and unusual treasures.But after a few weeks, it all goes back into a carefully-crafted storage space.“But there’s always next year, Christmas,” she said enthusiastically.By Sally Friedman / Correspondent Posted Dec 24, 2018 at 11:00 AM