A Film Score without the Film

Posters advertising next week’s showings of the film Selma and a video of the Berlin Philharmonic playing Shostakovitch’s Symphony #11 (The Year of 1905) have remarkably similar images. 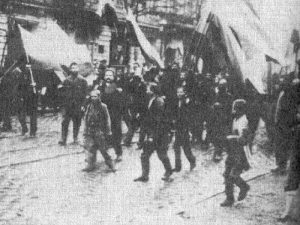 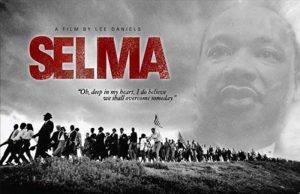 Text and photos  from Wikipedia: Shostokovich’s Eleventh is sometimes dubbed “a film score without the film.” The musical images have an immediacy and simplicity unusual even for Shostakovitch the epic symphonist, and an additional thread is provided by the nine revolutionary songs which appear during the work. Some of these songs date back to the 19th century, others to the year 1905. Shostakovitch does not merely quote these songs; he integrates them into the symphonic fabric within the bounds of his compositional style. 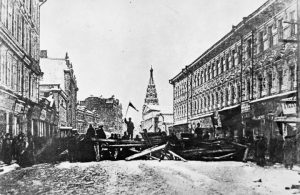 Photograph: Barricades manned by workers of Schmidt factory. Taken at bldg. no. 12 (on the right), camera facing west.

Adagio (The Palace Square) The first movement is cold, quiet, and somewhat menacing, with transparent strings and distant though ominous timpani motifs. This is underscored with brass calls, also as though from a great distance. Allegro (The 9th of January) The second movement probably depicts the petitioners of 22 January 1905 [O.S. 9 January], in the city of Saint Petersburg, in which crowds descended on the Winter Palace to complain about the government’s increased inefficiency, corruption, and harsh ways. Adagio (Eternal Memory) The third movement is a lament on the violence, based on the revolutionary funeral march “You Fell as Victims”. Toward the end, there is one more outbreak, where material from the second movement is represented. Allegro non troppo (Tocsin) The finale begins with a march, (again repeating material from the climax of the second movement), which reaches a violent climax, followed by a return to the quietness of the opening of the symphony, introducing a haunting melody. After the extended solo, the bass clarinet returns to the earlier violence, and the orchestra launches into a march once again. The march builds to a climax with snare drum and chimes in which the tocsin (alarm bell or warning bell) rings out in a resilient G minor, while the orchestra insists a G major. In the end, neither party wins, as the last full orchestra measure is a sustained G natural, anticipating the future events of 1917.