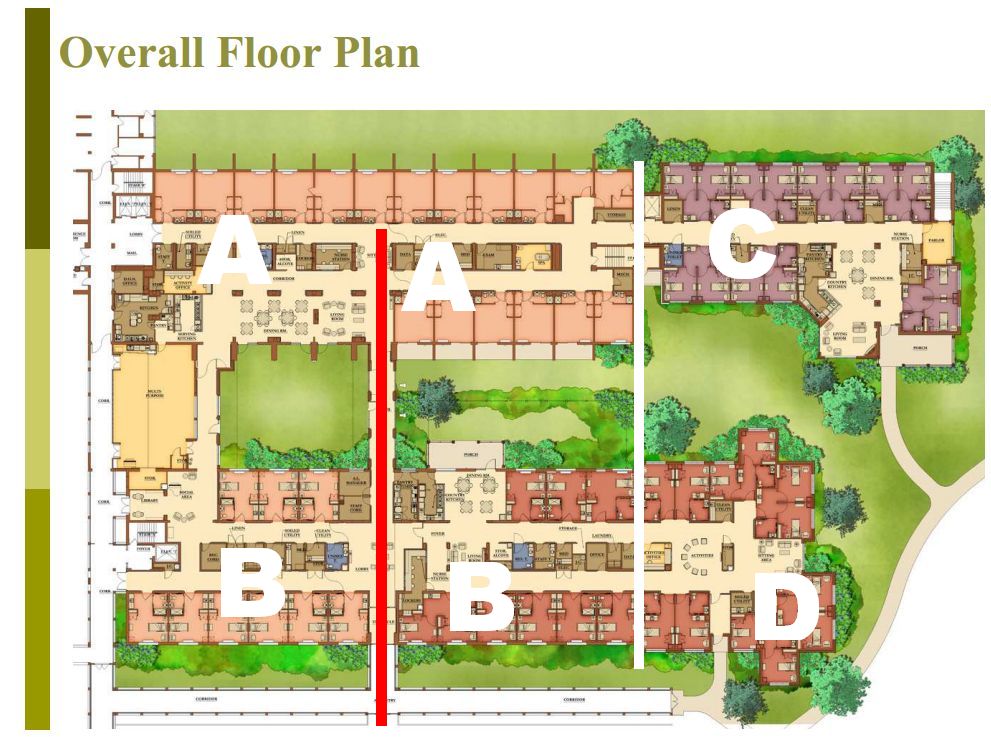 Jereremy Vickers’ Community Conversation on June 21, 2013  was largely about plans for “Estaugh Redevelopment, ” a term which is used to refer to the redevelopment of Medford Leas licensed units for Assisted Living and Long Term Care in both the Elizabeth Haddon and John Estaugh buildings.   This extremely long post uses images from the June Community Conversation to explain the construction plans.

The existing buildings are to the left of the vertical white line.   The letters “A” label Haddon, the present building for Assisted Living.  The letters “B” label Estaugh, the present building for Long Term Care.  The vertical red line denotes a future passage between these two buildings which does not currently exist. Now these two buildings are completely separate. Each of them opens into the corridor, shown in white, at the left in this image.  The letters C and D label the new construction – the future extensions of the two buildings.  The section labelled C will be the “Total Care Unit.”  Section D,  combined with the B section to the right of the red line, will be the “Memory Care Unit.”   Assisted Living will be the sections labeled A  and the B section to the left of the red line.  Notice that Assisted Living residents are close to the corridor shown in white that provides them access to other areas of Medford Leas.  Residents in the Total Care and Memory Support Units, who do not leave their areas unaccompanied, are further from the corridor. 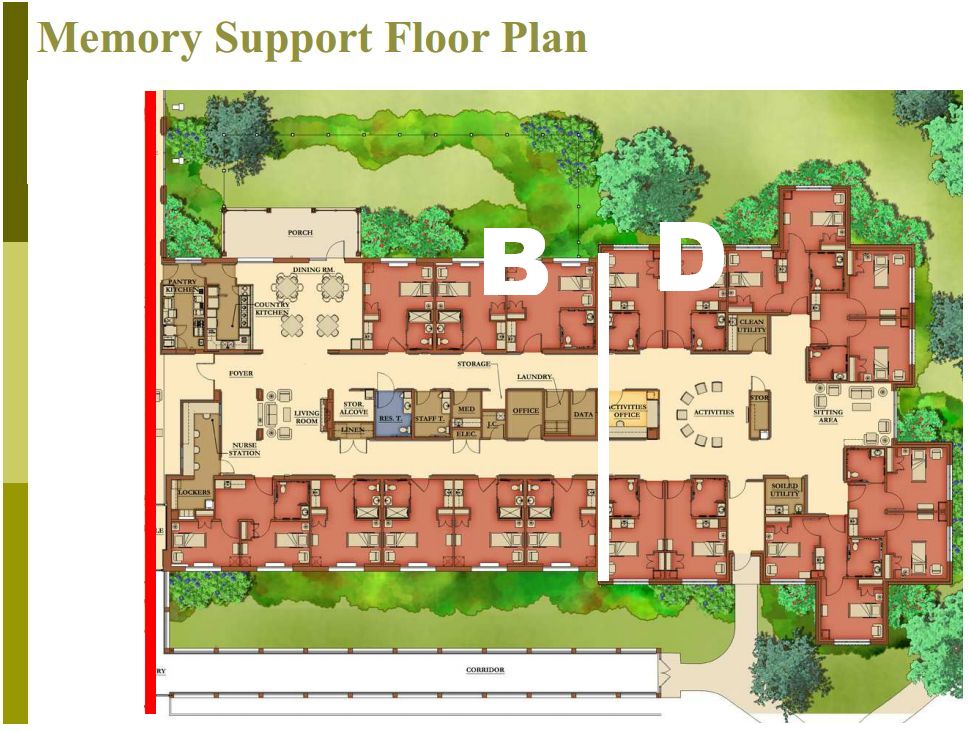 Everything in this image is the  Memory Support Unit. It is combination of new construction (D) and a newly modified section of the existing John Estaugh building (B).  The white line does not represent a physical structure. The red line shows the corridor going to the main exit (bottom of image) through the garden and on to the Assisted Living  on the other side of the garden.  The common areas of the Memory Support Unit are shown in tan, with an emergency exit at the lower right. The sitting area at the far right looks out into the landscaped grounds of Medford Leas.  The dining area provides a door to a porch next to the garden between the Memory Support Unit and Assisted Living. 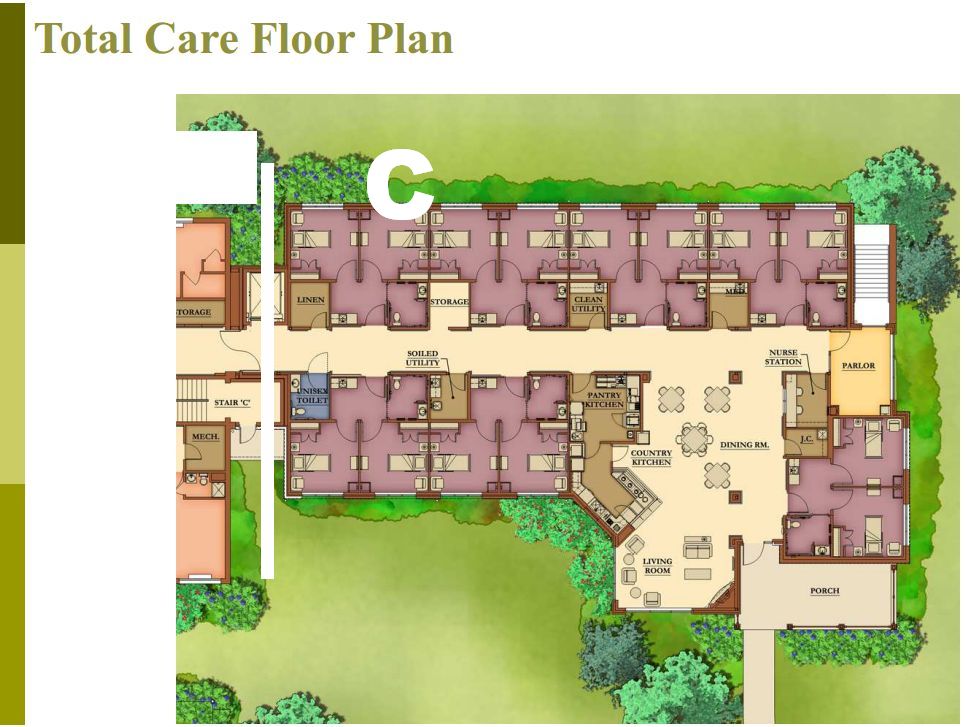 The Total Care Unit is new construction which attaches to the Elizabeth Haddon Building.  It is on land that was once occupied by Court 19.  The staircase at the left of the white vertical line at one time connected to a covered walkway which was used by independent living residents as their passage to the Community Building.  The demolition of Court 19 and the covered walkway will be shown in another post which also shows the work done to provide a new covered walkway.   The Total Care Unit (sometimes called “Sensory Care Unit’) provides a “Country Kitchen,” dining room, parlor, and porch .  Each pair of rooms shares an entrance and a bathroom.   The “concept image” below   illustrates how they are single rooms  in the sleeping/sitting area and with a shared entrance and bath.   Close examination of the Memory Support Unit shows five instances where rooms have this configuration: an entrance with one  bathroom that leads to two bedrooms. 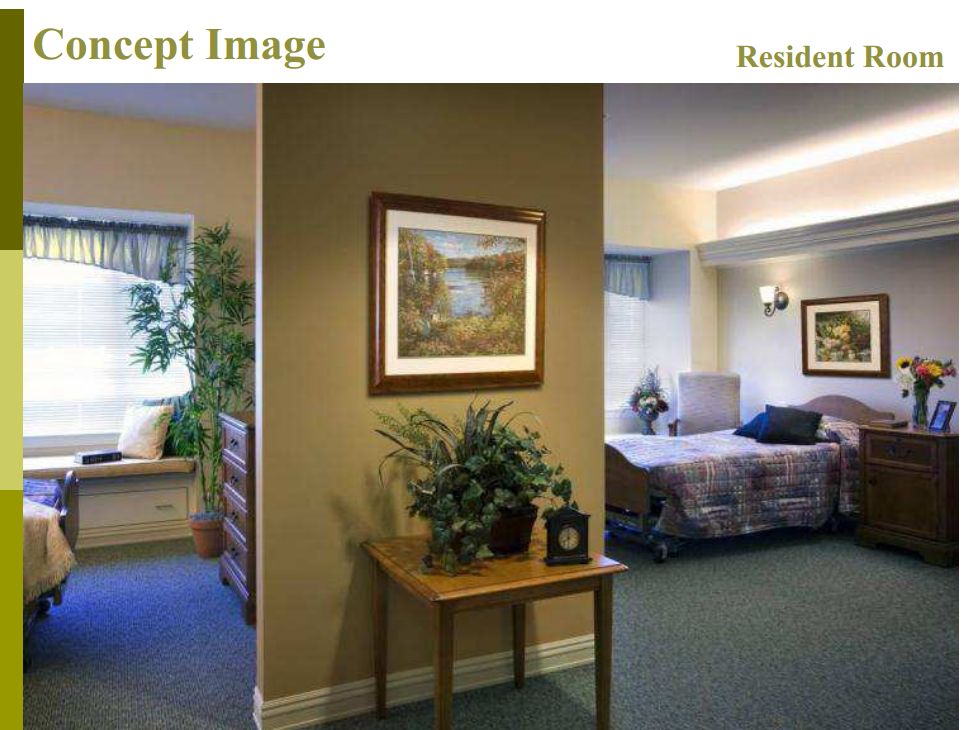 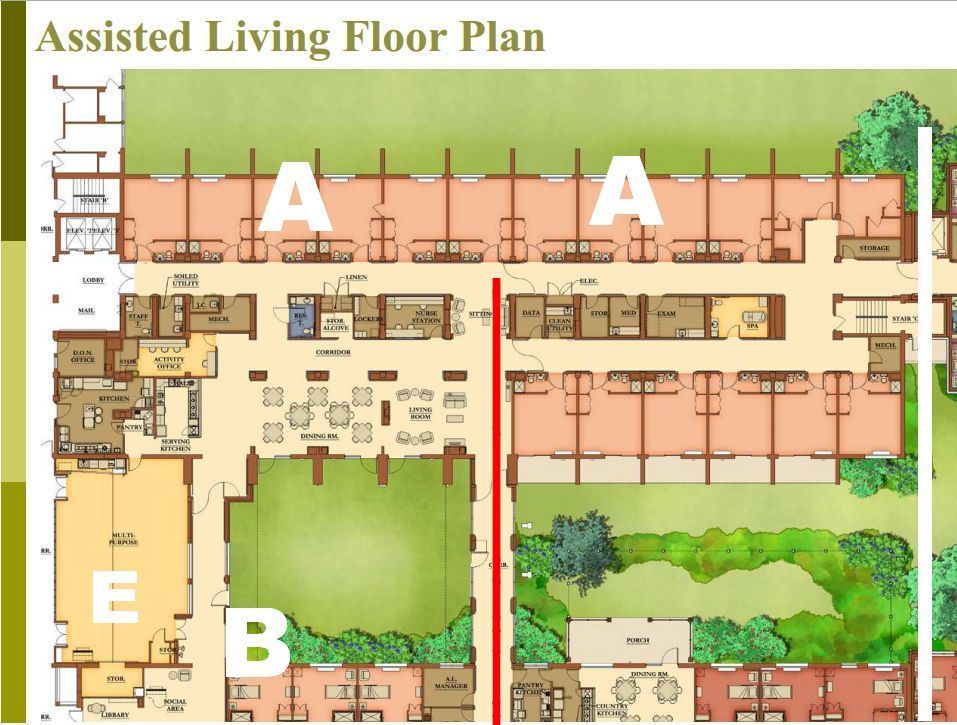 There are two images which show first floor Assisted Living. The image above shows the a Haddon Building which currently has has private rooms  for assisted living.  Notice the Multipurpose Room (now known as the Activities room), labeled  E.  The Activities Room currently doubles as a dining area. In the future there will be enough dining rooms in the licensed units that this will no longer be necessary.  The image below shows the section of the Estaugh Building which will become Assisted Living with the conversion of semiprivate rooms to private rooms. 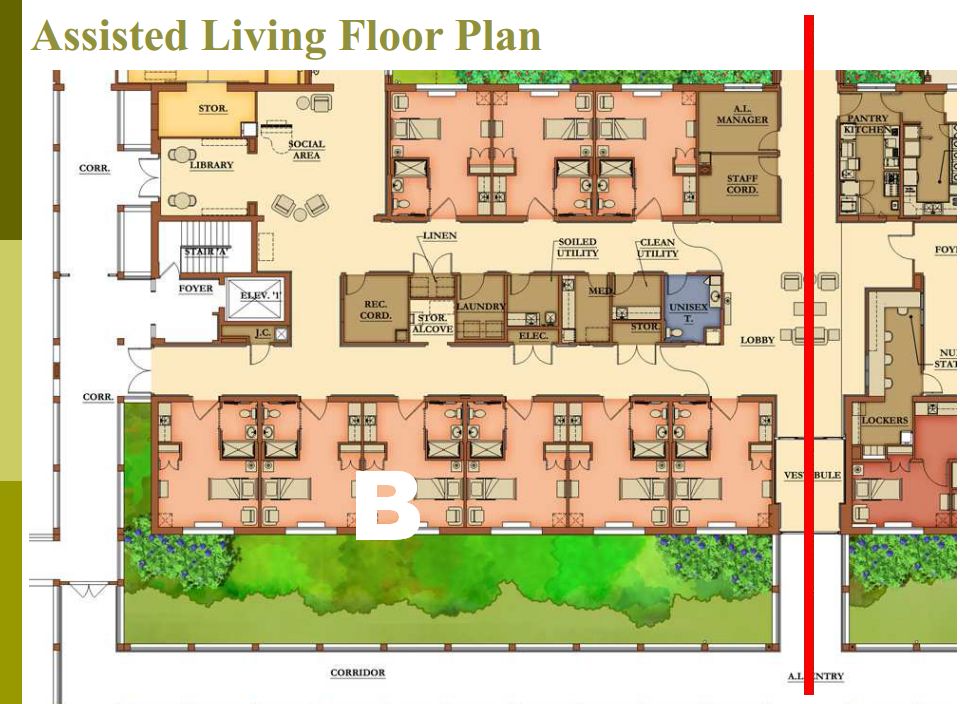 The next series of images explain the Construction Logistics and the three phases of construction. 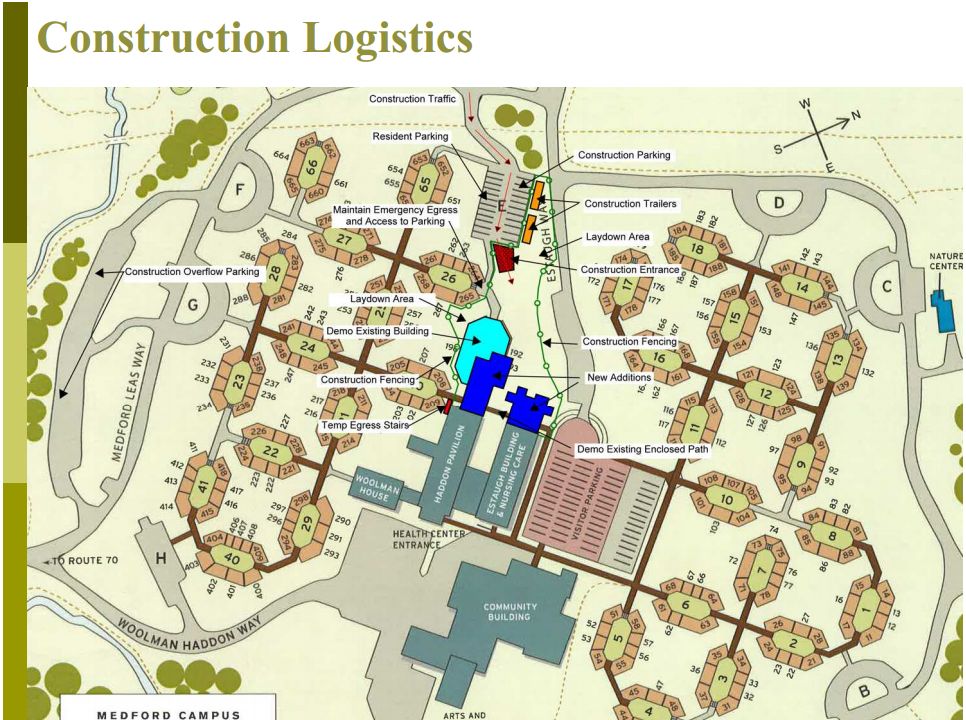 New construction, extensions to existing buildings, is in purple.  The extension from the Elizabeth Haddon Building extends onto a turquoise area where Court 19 once stood. “Demo” here means “demolished.”  The green line represents the chain link fence which surrounds the construction area.  Next a closeup. 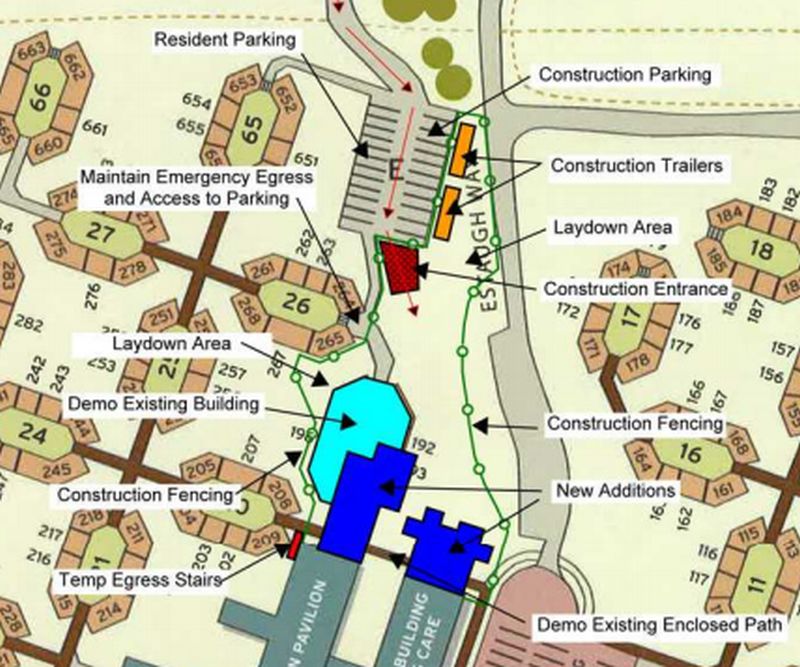 The heavy construction equipment has access to the construction area through that dark brown space which is labelled “Construction Entrance.”   The covered walkway (enclosed path) which must be demolished is also colored brown. 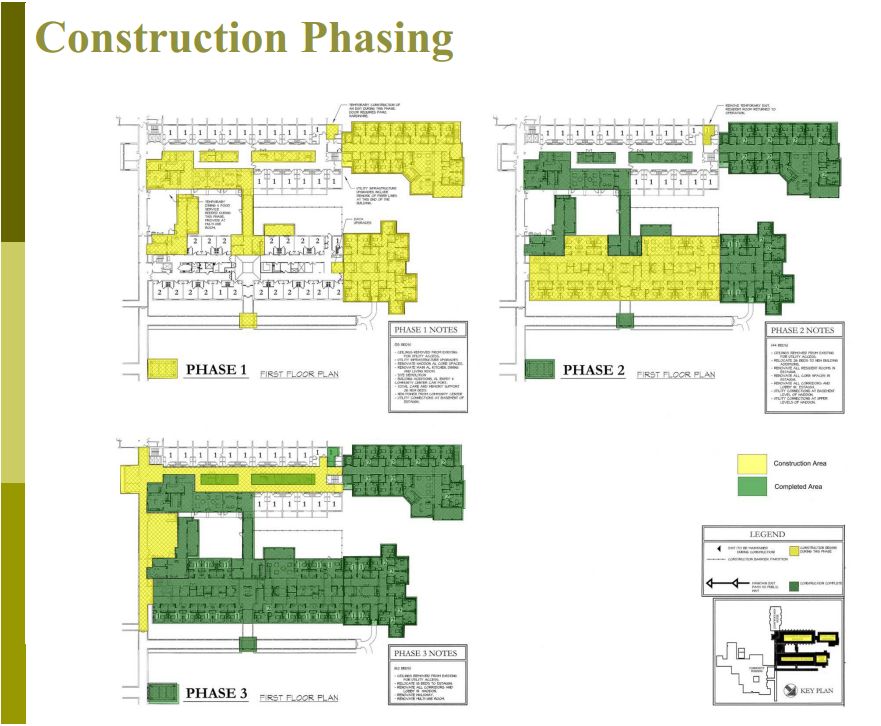 The image above shows all three phases.   This will be happening during all of 2014 and completed sometime during the last half 2015.  In these images light green represents what’s happening in that phase and dark green represents the work that’s been completed. 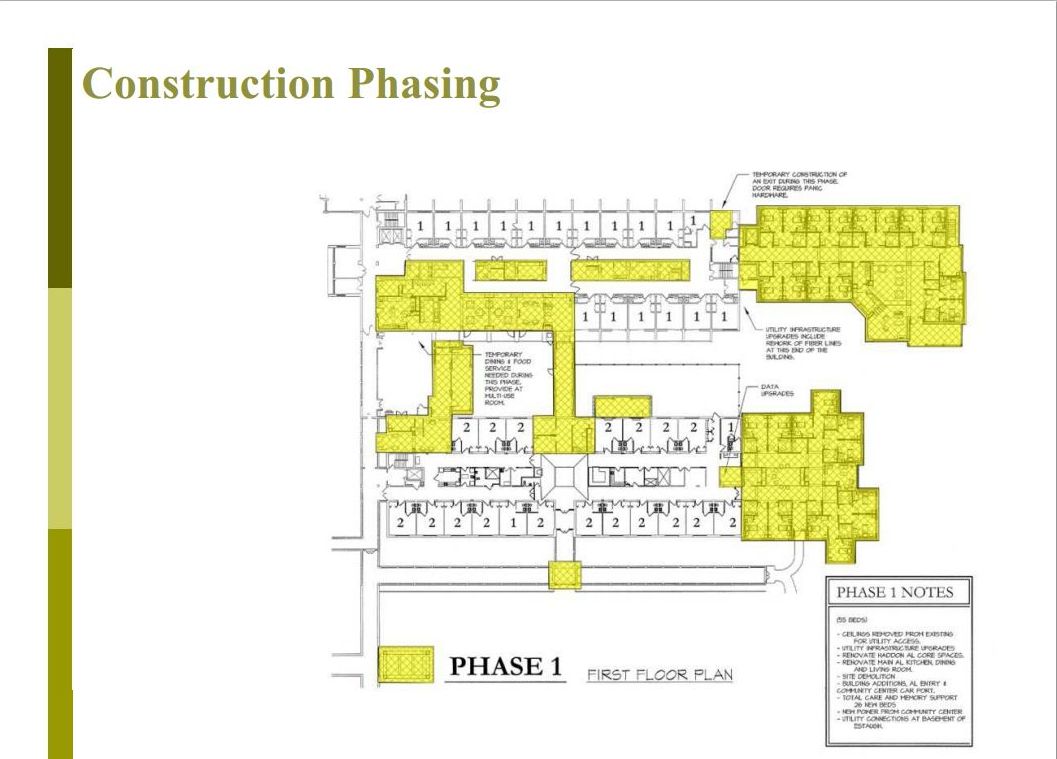 The two additions will be added during Phase 1.  The corridor connecting the two buildings (red line in earlier images) and other common areas of the Assisted Living Unit are also completed during this phase along with a good deal of utility upgrades. 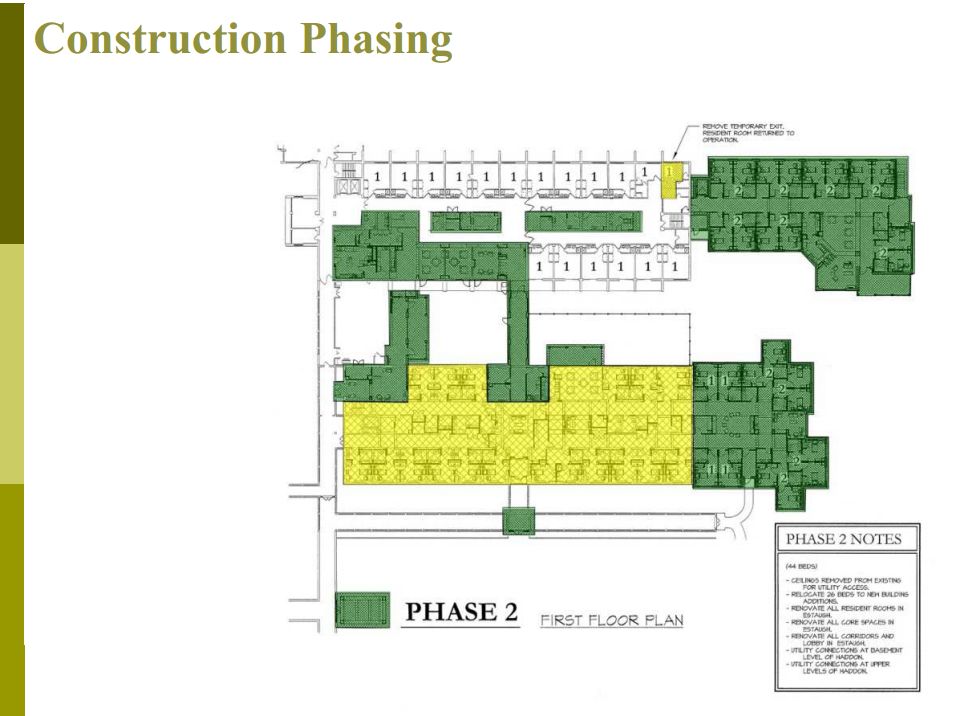 The John Estaugh Building will be renovated during phase 2.   Single rooms will replace double rooms. Some of these rooms will be for Assisted Living, others will become part of the new Memory Care Unit. 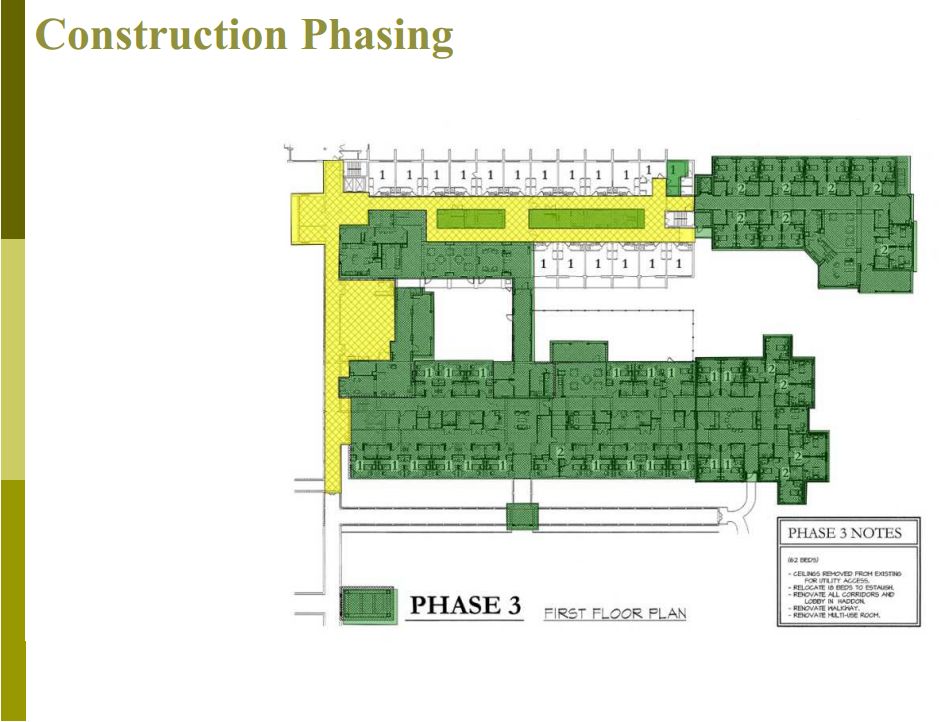 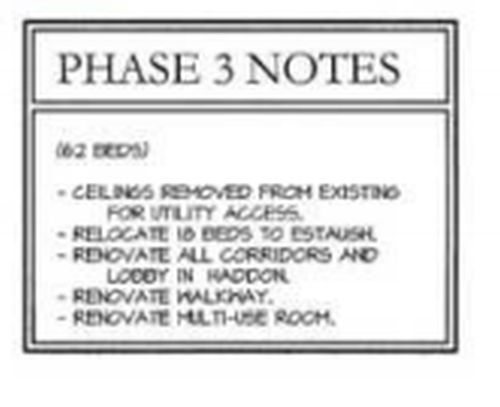