The 2014 Holiday Show is tomorrow.  Gerry’s two-part article about the Holiday show. “A Little History” and “How it’s done”  follows a gallery of photos from the 2013 Holiday show.  Photos by Margery Rubin Click on any of thumbnail and then move in either direction through the captioned photos.     Note: Before looking at the gallery, make the window as wide as possible, then the photos will be as big as possible. 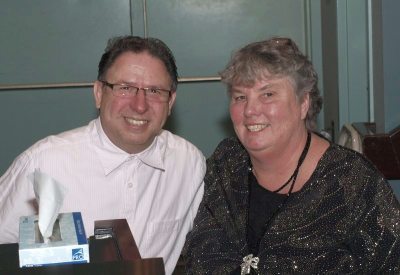 ABOUT THE SHOW — by Gerry Stride

Then — A Little History

Back in the day, and I can’t say when, the auditorium was where the lounge and library are now. Staff gathered and sang Christmas carols to the residents. This evolved into a bigger production when the auditorium was built. Bill Murphy and Mark Wick may be better historians of the early days. I came to work here and became part of the committee.     Mary McGlone was in charge of personnel and she headed the committee. We all helped her develop the script and rewrite songs but she was the director-producer of the show. In those days lots of times we were finishing the script 24 hours before the performance. It was in the day before we had computers. We researched material in the library, fake books and did not have the resources we have now. When Mary left I inherited the job. I think that was 1992. P.S. A fake book is a collection of music with one line of music and the chords. Keyboard players use it. Mark likes it better than notes and written chords.  editors note:wikipedia.org/wiki/Fake_book gives the history of fake books. Now — How It’s Done Now we begin in September with a brainstorming session. The first meeting we come with possible topics for the show. Then as a committee we decide which idea might have the most possibilities to develop into a script. Sometimes the original idea gets transformed as we develop it into a different show than we first thought. For that reason we usually keep our ideas within the committee until they blossom. It’s always a challenge to write the right act for ten different departments using each department’s best abilities. We meet weekly until we’ve worked everything out. I have several additional faithful committee members who brainstorm with me…and we develop the script, change words to songs if needed and finally share the ideas with each department. There are usually one or two people in each department we can depend on to organize their group for practice and what they will wear. Most departments practice on their own and then we rehearse with music for the first time the week of the show. Mark has been playing in shows for over thirty years and does a superb job with musical support. We added Joe Pantano with his keyboard in the early nineties and have including him ever since.  Once on the way to the emergency room he stopped in the theater to tell us he couldn’t make practice.  He was well enough to play for the show later that week. The Committee: Nancy Adams, Susan DeJacomo,  Tammy Gerhart, Joanne Gartenmayer, Cathy Kissane, Marcy Smith, Jane Weston, Mark Wick and me. This year Marcy Smith did the black and white movie, burned CD’s for rehearsals and created the stage scenery with the help of Whitney Mapp and Leah Beckett.  Lori Jakelsky printed tickets and announcements.  Susan DeJacomo worked behind the scenes arranging rehearsal times and working the curtain.  Jane Weston organizes the ticket distribution.  Mary Calabrese orders costumes and props and was doing that long before I came on the scene. Cathy Kissane organizes the ushers. All of the staff are very enthusiastic about participating and look forward to knowing what their role will be. They are always good sports about doing whatever is asked of them. It has been a standing tradition that we keep the program a surprise from the residents. In former years one resident (name withheld) used to send bribes to Mary McGlone to be let in on the secret of the plot. Currently only Medford Leas staff plead and beg for an advance look at the script … they say it’s to meet their deadline, but it causes me to wonder … My role is like that of the orchestra conductor. I try to put all the pieces together, typing the scripts, finding the skeet music, distributing parts, coordinating costumes and making it work as we conceived it.  Our first full dress rehearsal is the first performance of the evening.  In the end the final production is a surprise to me as well.  You never know what or who will be the hit of the evening.  When it’s all said and done most of the people tell me their favorite part of the show was Bill Murphy.  Go figure!!