CANCELLED Cape May – The Evolution of this Popular Seaside Town 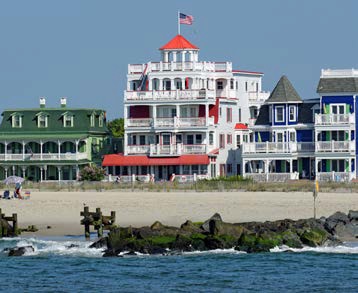 No fee. Registration deadline: March 29. PROGRAM The original residents of Cape May were the Lenni-Lenape Indians, but how did this area transform from the hunting grounds for these Native Americans, to the popular shore town it is today?Join Jason Love as he traces this town’s remarkable history from the Lenni-Lenape Indian population, to Captain Cornelius Mey’s first sighting in 1621, to the mid-19th Century when Cape May became a resort town for people looking to escape Philadelphia during the summer, to the Cape May of today—with its renaissance of preservation of historic times. With the expansion of the railroad, surrounding shore towns, including the Wildwoods, Avalon, Stone Harbor, and Ocean City began to expand. Today, the Jersey Shore tourism industry is a huge boost for the New Jersey economy. The swelling of the population of these shore towns occurs naturally during the summer months, but due to increased interest in this historic area, tourism is also increasing during the fall and spring seasons. This lecture will explore the past, present, and future of Cape May.PRESENTER Jason Love enjoys history and gives presentations throughout South Jersey. He has a history degree from West Chester University, and just last year presented a popular program on the topic of baseball. Love currently works for Rutgers University– Camden. His family has a home in Wildwood, New Jersey.
+ Google Calendar+ iCal Export