All but two of the links go to the Medford Leas Residents Wildflower Site and they all give botanical names.

There was was Milkweed, Coreopsis, Fleabane Daisy, and Purple Vetch.  Milkweed’s cousin, Butterfly Weed, was present, but not abundant.  We easily identified the Yarrow and Blackeyed Susan and saw which looked like a white version of Blackeyed Susan;  does such a thing exist?We also saw a lovely small white flower with five deeply divided petals and a lovely small pink flower.  Later, after checking the MLRA Wildflowers Site, we identified them as White Campion and Storksbill.  Along the edge of the meadow there was Gallardia, which is not a wildflower; it had been planted.  Leaving the meadow we returned by the Railroad Trail where there were not-yet-ripe wild blackberries.The gallery shows nine photos taken on June 20, 2015 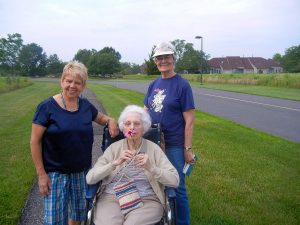