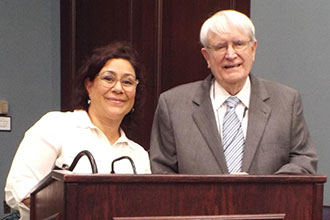 By Sally Friedman / Correspondent Posted Jun 10, 2018 at 8:41 PM Two legal experts addressed the legal decision-making processes on current LGBTQ issues to coincide with Pride Month to an audience of about 100 residents. It seems a long leap from wedding cakes to the United States Supreme Court. But these were the issues that came up at Saturday’s Medford Leas Forum, a longtime tradition at the continuing care retirement community where discourse on a wide variety of subjects has become a staple of the community’s intellectual life. During the forum, two legal experts addressed the legal decision-making processes on current LGBTQ issues to coincide with Pride Month to an audience of about 100 residents. Judge Harold B. Wells III, who had served as Burlington County’s Assignment Judge and on the Appellate Division, acted as facilitator. Guest speaker Brenda Maneri, who serves on the Burlington County Bar Association’s Committee on Diversity, has taken a keen interest in diversity issues as they relate to the law, according to Wells. Maneri, a criminal defense lawyer who formerly served as an assistant Burlington County prosecutor, said that the Supreme Court’s recent decision on a wedding cake discrimination case has added a certain timeliness to the discussion. That case, which was decided earlier in June, put a high-beam spotlight on the Masterpiece Cakeshop bakery owner in Colorado and the Colorado Civil Rights Commission that brought a ruling that has ignited considerable interest. The American Civil Liberties Union filed a lawsuit on behalf of a gay couple when the bakery’s owner refused to make them a wedding cake because of his own religious belief against same sex marriages. The ACLU complaint claimed that the baker’s actions violated Colorado law, which prohibits businesses from denying services on the basis of race, gender, or sexual orientation. The case has had reverberations around the country. The Colorado Court of Appeals ruled in favor of the ACLU position before the Supreme Court narrowly ruled for the baker on grounds that the ruling the government may not show “hostility” to religion. It is anticipated that the case will ultimately returned to the Supreme Court. At the Medford Leas Forum, a spirited discussion took place about how social mores have changed so drastically, and how issues of gay rights have filtered down in ways that were not seen just a few decades ago. One of the crisis areas is in schools, where issues of transgender students have erupted and anti-discrimination matters have either enlightened and divided parents and school officials, Maneri said. The attorney gave an example in Burlington City, where Doane Academy officials worked with a transgender student, parents and peers when that student returned to class as a different gender. Audience members commented on the divisiveness as well as the new enlightenment that has brought issues that once were barely whispered about into the public dialogue. The lively interchange was the goal of the event, said Medford Leas Forum chair Dorothy Cebula, who works with an active resident committee on speakers. Cebula said she was gratified that despite inevitable differences of opinion the overall atmosphere was one of learning, listening and exploring the world as it is. The discussion, and question and answer period also included issues about same sex adoptions, foster parenting and the challenges, and hopefully the ultimate rewards for those for whom these legal issues are very real. As one audience member noted, “we are living in very different times but ‘different’ does not automatically mean negative.” Wells agreed that while audience members may have had different reactions to the morning’s discussion, it was a gratifying example of true informed discourse on matters of public importance. There was a special bonus for Maneri. “I was so happy to interact with such an enlightened and open-minded audience,” she said. “This forum was a wonderful example of freedom of expression at its best.”