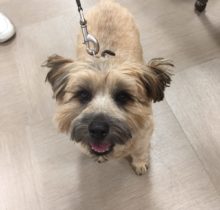 It was a dog lover’s afternoon.There was standing room only.  The room was lined with residents and staff for the Eleventh Medford Leas Dog Show. The ten dogs competing in the show and their owners waited quietly in the wings. The judges were ready for the heavy job of handing out the ribbons. Prepared for the challenge? “Oh, yes,” quipped Helen Hamilton. “We’ve been studying, and we are dog specialists.”To the delight of the onlookers, the dogs were entered into any of several categories, with the last being Best in Show. Right from the start, it should be said that there was never a better behaved group of dogs, and all the owners, both staff and residents, must be complimented on that.Each dog made its entry with an introduction by Marcy Stevenson, coordinator of Healthcare volunteers. She noted its breed (or mix), its age and weight, and its favorite occupation, and called attention to its special features.To see better (uncropped)  photos – click any thumbnail and then proceed forward or backward through the series. First prizes were as follows: There was a sense of celebration in the air, since the dog shows have been canceled during the reconstruction of the Oak Room. At last it can be called the Annual Dog Show again.adapted from an article by Betsy Pennink in the April 2017 issue of Medford Leas Life.  photos by Betsy and Joyce Koch