I had moved to the Lumberton campus in February 2016, and in September I agreed to be a resident vendor at the Craft Fair without ever having attended one. That gave me about three months to create an inventory and learn the ropes. The thought of setting out my origami creations next to the wares of juried craftsmen intimidated me, but Art Hartwig, my neighbor and a seasoned vendor and craft fair veteran, offered advice. He explained how the finances worked and suggested ways to price my merchandise. Other new friends who would be working on that Saturday volunteered to help on fair day and offered to take over should I need a break.

After weeks of frantic folding, packaging, and planning, the big day arrived. Friday afternoon in the parking lot of the Arts and Social Wing was busy with vendors unloading, resident volunteers pushing handcarts, helpers opening doors and directing traffic. I recognized many people from Lumberton who whisked me to the Garden Room, which I vaguely recognized from the lobster dinner of late summer. They unloaded my boxes and left me to set up. All around were the outside vendors with racks and shelves. They greeted me and went back to arranging soaps, jewelry, crocheted items, and knitted shawls with the precision of seasoned merchants. My display looked awkward and pitiful by comparison. The 2016 craft fair was a blur. I tried valiantly to keep the receipts straight and answer questions. Customers appeared, and merchandise vanished. Friends helped. I met so many new people that I gave up trying to remember names. At four o’clock, I broke down the set and put the remains of the inventory into whatever boxes came to hand first. Things sold, people were friendly, and I had money in the till, but the day was a blur. I had played my part successfully but didn’t feel as though I really belonged to this energetic and closeknit community. 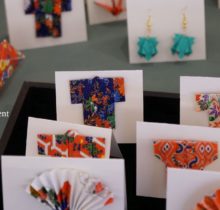 Fast forward to December 2017. I have now lived here almost two years. I have been working on origami inventory since I agreed to vend a second time—just ask my housekeeper, who has been dusting around a small artificial Christmas tree in the loft since July. I know where I will be selling and how to better set up my display. I still need some encouragement, but friends readily supply it. I arrive at about 2:45 on Friday afternoon to set up my familiar table in the Garden Room. This year, the parking lot is quiet. There are plenty of parking spots, two handcarts, and no one in sight but me. Surprised but undaunted, I load my cart, wrestle with the reluctant automatic doors, and head for the elevator, hoping that the cart will fit. It does, and luckily Dorothy Cebula joins me. She holds the door and helps maneuver the cart out on the floor above. I do need some help, and a friend supplies it.The venue is quiet. Many of my fellow vendors have come and gone already. Three tables across from me are draped in sheets, covering bulging merchandise beneath. The jewelry maker behind me has her elaborate shelves and display stands all set and merchandise locked away in cases. On the table next to mine, the crocheting people from last year are just putting the finishing touches on their displays. They say hello and depart. After setting up, I look into other rooms and see residents I know setting up their tables. Quiet competence replaces last year’s hubbub.My second craft fair unfolds very much like my first in many ways. People come by, ask about prices, and make their selections. I muddle some of the receipts; friends help. The atmosphere has changed, however. I have more confidence in my merchandise. I recognize people from the Writers Roundtable, water volleyball, and Medford Leas Life. When outsiders ask me what it’s like to be part of the community (three different people do ask this), I feel comfortable responding. At four o’clock, I am tired but not frazzled. People told me it would take at least a year to settle into Medford Leas at Lumberton. I joined groups, worked on projects, and attended events. I enjoyed myself but felt I was playing the role of a resident, always wondering if I had done it correctly. It took longer than I thought, but the second craft fair experience was what it took to make me feel like an insider, no longer a self-conscious observer.