Tak and Yuri – Photoessays and Forum 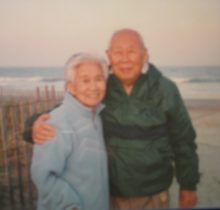 The photo essay at mlra.org/magazine/Moriuchi.htm  includes a picture of Tak as a boy, Yuri’s wedding photo, and a 1992 family photograph.  Today at 10 am, their daughter, Chiyo will speak as part of the Pathways Program.  A companion photoessay, also prepared, by Sumi Kobayashi for the 2008 celebration of Tak’s life tells of the imprisonment of Japanese Americans during WWII tells of the 18 present and former residents of Medford Leas who were imprisoned. mlra.org/imprisonedwithouttrial.htm

Chiyo Moriuchi is the daughter of Takashi and Yuriko Moriuchi, who were among the over 110,000 American citizens of Japanese descent incarcerated inthe United States during World War II. This is the story of their experience confronting the anti-Japanese hysteria and the government sanctioned racism that uprooted their lives and put them in America’s prison camps during World War II.It is a shameful and little known episode in U.S. history. Japanese Americans were imprisoned simply based on their race. Given some of today’s talk advocating harsh treatment of religious and ethnic groups for the sake of national security, it is worthwhile to reflect on our actual historical experience with such an initiative.Tak and Yuri lived at Medford Leas and were instrumental in the formation of this community, guided by Quaker principles since 1971. Chiyo Moriuchi is a former board member of the Nisei Student Relocation Commemorative Fund, which was established to tell the story of the Japanese American experience. Her interest in researching and speaking on the “internment” is to promote wider knowledge and understanding of this violation of American ideals.PRESENTER Chiyo Moriuchi, a lifelong Quaker, is a program manager for Columbia University’s Robert N. Butler Columbia Aging Center. Her earlier career included over 30 years in finance and real estate investment management. She is a trustee of George School, The Estaugh (Medford Leas) Board, and the Thomas Scattergood Behavioral Health Foundation. She is a cum laude graduate of Mount Holyoke College and earned her Masters of Business Administration and her Masters of Public Health from Columbia University.