The Tradition of Origami at Medford Leas 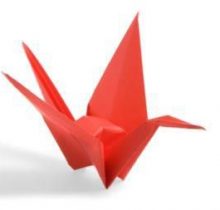 From its founding, Medford Leas has had connections with Japanese traditions that have enriched the entire community. In December 2016 residents continued and expanded them to bring a message of peace to us all. The Iconic Crane in Origami – The best known origami model is the crane, a three-dimensional winged bird representing a Chinese Taoist symbol of long life and good fortune. Cranes appear in Japanese folk art, and folding them has been popular for centuries. After World War II paper cranes became a symbol of peace when Sadako Sasaki, a girl orphaned in the bombing of Hiroshima, began folding them as she was dying from radiation sickness. She believed that folding 1000 cranes would bring her recovery. Although she died in 1955, her story was publicized first in Japan and then around the world. In 1958 Sadako was memorialized with a statue in Hiroshima Park, and peace-movement sympathizers continue to fold cranes and send them to be hung from the Peace Tower. Medford Leas Tradition – Among the decorations displayed during the December holidays, one in particular captures the peaceful spirit of the community and reflects its Japanese heritage. Resident Steve Yanai has been decorating the small tree in the Atrium outside the library with miniature origami cranes in rainbow colors for more than five years. Each year he folds a new batch from 2-inch kami. Around the tree’s base Steve displays more of his handiwork; this year a Santa Claus in blue boots stood out. The extra cranes find their way into other parts of the campus to the delight of staff and residents. 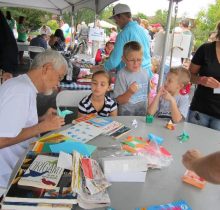 Steve learned origami as a child in his native Japan and later taught the art to generations of elementary school children in Syracuse, NY, where he worked. He became involved with the Medford tree tradition when Mary Toda, another resident, asked for his help. Mary, a friend of Takashi Moriuchi, one of the founders of Medford Leas, did not fold herself, but her family put up a small origami-trimmed Christmas tree each year for the residents to enjoy. When they were no longer able to do this, she enlisted Steve to help her. He does each tree in memory of Mary, who passed away in 2013. 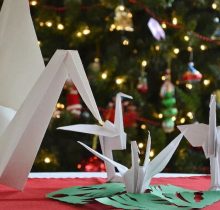 A New Flock of Cranes – On December 1, another flock of over 200 cranes appeared, this time in the Community Center on the Lumberton campus. Made from 5-inch, 8 1/2-inch and 20-in squares of paper and they soared in the rafters and nested in residents’ mailboxes on the night of the holiday gathering. Members of the Lumberton Social Activities Committee met and learned to fold the models from Rumi Sinunu and Kathy Riley; John Speirs, the mantelist, and his assistants, Anita Ringen and Judy Norcross, oversaw the installation of the birds with the help of James Emerson, from Medford campus maintenance. Others donated craft and photocopy paper and offered useful