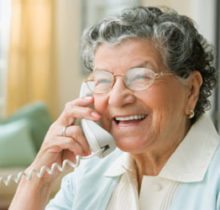 One of the reasons I use the Voice menu service is that it saves me going over for food when the main dish is liver,” a resident admits. “But that is not the main reason. It is hard for me to read paper menus.” What is The Voice menu? Use your house phone from anywhere on the Medford campus and dial 7 or 3405 for the menus, as recorded by the faithful members of the Voice Committee.    Another resident explains, “I use The Voice menu often because of my poor vision. I can’t read the paper menus or the one on TV house channel 2. The Voice menu is a great help.” Other grateful listeners agree. Over a decade ago, a group of residents began to record each week’s menu in order to assist other vision-impaired residents who found it difficult or impossible to read a paper menu. They also had the idea of recording the calendar events but discovered that last-minute changes made the recording inaccurate, so that aspect of The Voice was discontinued. The committee chair recently retired after 13 years of service, but with out missing a beat, the work continues with ten resident volunteers, who explained the process to this reporter.  “The recordings are made in the Administration offices behind the receptionist. You have a little office all to yourself. You can make believe you are on the radio.” “The recording is done on what looks like a telephone answering machine. You press a button down and talk.”  “It is done after 6 pm, so it can handily be done after dinner. It only takes about ten minutes, because we have a lot of residents on the committee, we each record every eight weeks or so.”  Members of The Voice Committee sometimes differ about whether to try to pronounce “jicama” properly, or phonetically, or whether to use an equivalent English word if possible. “I’ll just say ‘pasta’ when the menu has some unusual type of pasta,” said one volunteer.  Another commented, “Sometimes I am challenged by how to get my tongue around the pronunciation of some of the new exotic dishes,”  I say, “I beg your indulgence. I’m glad our chef is trying new dishes.” “Once in a while, like any other older person, we will forget to record after dinner. If you see someone running through the community at midnight in their pajamas, you’ll know where and why they are going!”