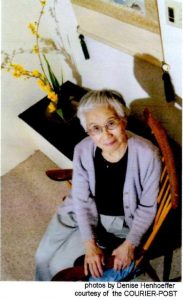 “She was a fairly shy person,” remembers Chris Darlington, speaking of Yuri (Yuriko) Moriuchi. She was the wife of Takashi (Tak), who was one of the founders, along with Lewis Barton, of Medford Leas. “Yuri could speak with flower arrangements,” says Hannah Wilson. “The Moriuchi family came to Moorestown in 1948, the same year we did. Our kids were in Moorestown Friends School, as were theirs. One year we had a Japanese exchange student staying with our family. Whenever we encountered communication or cultural issues that year, Yuri helped us all out.” An article about the Moriuchis by Sumiko Kobayashi on the MLRA website describes Yuri and her husband’s lives before Moorestown. Born in California in 1918, she studied accounting in college and took up Ikebana (traditional Japanese flower arrangement). During World War II, Yuri and her family were imprisoned in one of the internment camps in the west, losing everything, as did most Japanese-Americans.  [Article about Sumi Kobayashi in Drew Magazine.] She and her brother eventually were offered employment by Quakers in Philadelphia to get them out of the internment camp. Participating in a new Japanese social group in Philadelphia, Yuri met Tak. He was also from California, had been looking for employment that would release him from the camps, and had been encouraged by Quaker Lewis Barton to farm in South Jersey. Years later, he was honored for his work in New Jersey agriculture. Yuri and Tak married in 1946 and raised four children. (Daughter Chiyo Moriuchi is currently vice president of the Medford Leas Estaugh Board.) As her children grew, Yuri became internationally known for her practice, teaching and judging of Ikebana flower arrangement. Warren Sawyer, a Moorestown Friends member who knew the Moriuchis for at least half a century, says, “Because of the difficulty of the language in her earlier years, Yuri was 100 percent interested and paying close attention to whatever anyone was saying. She made you feel she was always listening to you. She was very, very gracious.” Recalls Edie Pray, “She always won a blue ribbon for her flower arrangements.” Hannah Wilson observes thoughtfully, “This is a loss for everyone — Medford Leas, Moorestown Friends and her Ikebana students all over the world.” “Not only was she talented in her Ikebana,” says Jane Weston, director, Development and Community Relations, “but she was inspired to share her knowledge with others. She was teaching a class in the Holly Room a few days before she died on August 3. What a way to go, doing what she loved right up to the end. She and Tak were so close, such hard workers. I think of them now as back together again.” A book, The Fruitful Life, written by the Moriuchi children about the lives of their parents, is in the Medford Leas library collection.