January 27, 2015 — Ralph Berglund
I went to bed last night anticipating a loss of power by morning.  Well, we lucked out again.  A relief for living life but still pretty scenes.  I wasn’t too enthused about going out.  It was still snowing but my camera insisted.  While seriously thinking about it, one of our stalwarts, Kevin, cleared the driveway with his front-end loader so I had no further excuse.  Layers and a balaclava in place I walked out just as another helper arrived with the rock salt.  Life is not tough here.  Anyway, half way down the street this tree caught my eye.  A good start. 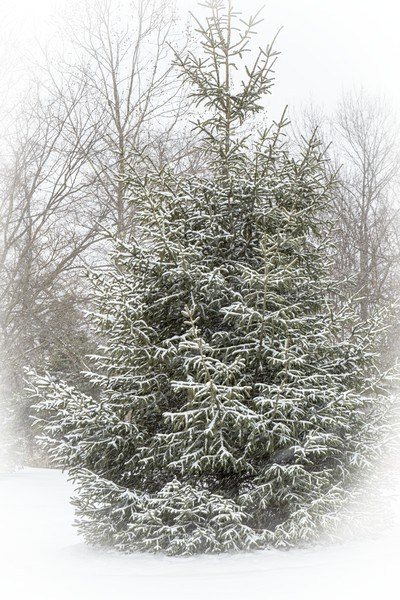 I trudged on, stopping briefly to invite friends out to play (Marilyn and Tommy T.) but they demurred. They just moved on campus last week: perfect timing considering their home is in blizzard-struck Beach Haven. Shortly I arrived at the office area and realized that’s the first time I’ve walked there. The Nandina bushes there had been catching my eye for several days; with the snow it was picture time. Credit my friend here, Jane Weston, for my knowing what the bush is called.

Continuing on through the courtyards I found these scenes:

By the nature center there is a magnificent yellow-berry holly.

Wending my way back home for a coffee I came across this courtyard with a surviving wreath.

I’ll take this kind of snow storm any day.